“I’ve rarely sunk to the level of dressing in civilian clothes.  I always go in Dalí uniform.”  Salvador Dalí, Diary of a Genius.
“As soon as possible, I wanted to make myself look unusual, to compose a masterpiece in my head.”  Salvador Dalí, Secret Life. 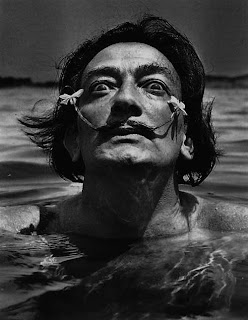 “Since I don’t smoke, I decided to grow a mustache – it is better for the health. However, I always carried a jewel-studded cigarette case in which, instead of tobacco, were carefully placed several mustaches, Adolphe Menjou style. I offered them politely to my friends: “Mustache? Mustache? Mustache? “Nobody dared to touch them. This was my test regarding the sacred aspect of mustaches.” Philippe Halsman,Dalí’s Mustache

Many marvelous and inspirational uses of this mustache are shown in this book. But every day I find new ones. This very morning, and just at the moment of not shaving myself, I discovered that my mustache can serve as an ultra-personal brush. With the point of its hair, I can paint a fly with all the details of his hair. 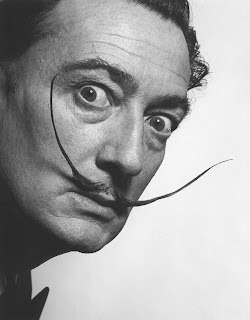 One of the Uber-self stylists of all time, always on, always outrageous. Dalí owns the notion of provocateur. Who else would say, “I don’t do drugs; I am drugs?” I love the Irving Penn photograph, one of several in his “Corner portrait” series of a variety of persons–cultural icons, socialites, and South American Indians. There are many photos of Dalí in more flamboyant garb, but I prefer photos of the younger Dalí, before he became a caricature of himself.
Tagged with → artist • dandy • dress • fashion • mustache
Share →
Tweet