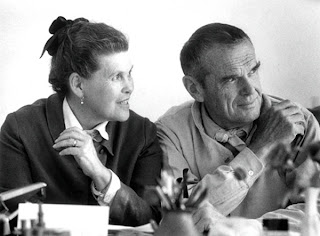 The Eameses were very precise about their clothes, commissioning them from Dorothy Jenkins, an Oscar-winning designer who did costumes for many films, including South Pacific, Night of the Iguana, and The Sound of Music. The effect of the Eameses’ costume was the  professional couple as a matching set, carefully positioned like any other object in the layout. The uniform clothes transformed the couple into a designer object that could be moved around the frame or from picture to picture.  It was always the layout that was the statement, not the objects.  And the layout was constantly reworked, rearranged.” Beatriz Colomina, “Reflections on the Eames House,” The Work of Charles and Ray Eames:  A Legacy of Invention. 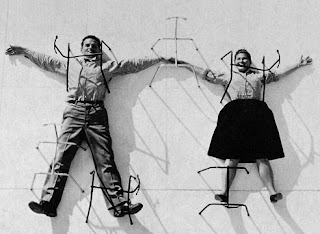 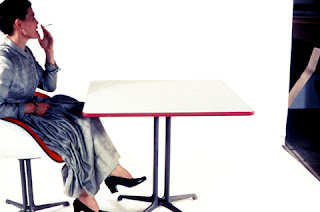 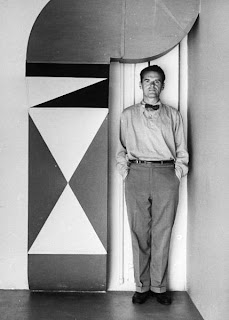 Charles Eames preferred to dress himself in similar clothes every day as a uniform – something he believed saved his energy for decision making at the office. The uniform: flat front khaki pants, thin belt, buckled on the side, bow tie. From August 1959 Vogue: “He likes to wear yellow-beiges, yellowish-greens, shirts of wonderful subtleties, roughly textured jackets, often with silver Navaho buttons which his wife, Ray, sews on a with special curved needle. These buttons are a partial clue to both the Eameses. They see the beauty in small oddities that others may miss. They are intensely practical. They work as partners, both designers, both filmmakers, both at ease in their life.”

Much has been written about the couple’s many design collaborations such as the Eames lounge chair, the molded plywood chairs, and their house in the Pacific Palisades. Their clothing choices were no less distinctive. A PBS documentary in the American Masters series, Charles and Ray Eames: The Architect and the Painter, provides information on their clothing preferences. Talk about the ‘layout as statement’: the couple’s arms and legs mirror one another in the two top photos. Charles Eames and Oscar Wilde have a thing about buttons!

2 Responses to Charles and Ray Eames