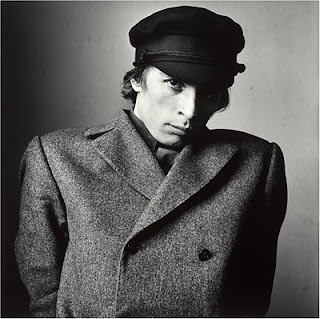 He was, as Maria Tallchief once sighed, “an extremely, extremely attractive young man.”

“I probably developed double-breasted-suit poisoning back in Russia in that period when Khrushchev and everybody else looked like walking refridgerators.” Nureyev cited in Otis Stuart, Perpetual Motion: The Public and Private Lives of Rudolf Nureyev.

Like Lord Byron, who adored the lush textures and colours of eastern clothes, Nureyev had succumbed to Turkomania, scouring the bazaars for antique fabrics, pelisses, caps and burnooses, and, in imitation of Delacroix’s portrait of the poet in his gold and crimson Albanian costume, he arrayed himself in rich Turkish robes, his head imperially turbaned. Having experienced a similarly explosive kind of fame, vagabond lifestyle and passion for the exotic, Nureyev recognised an alter ego in Byron. The erotic charge of the eastern tales, their dark subversiveness, which aroused both mass adulation and secret fantasies, created a similar impact to the dancer’s own Corsair; the description of Byron as “a wild mountain colt” is a fitting image of the young star. But to Nureyev, the most deeply felt link of all was the sense of alienation, “the feeling of belonging to no country”, their inclination towards homosexuality having forced each in their turn “To seek abroad, the love denied at home.” Julie Kavanaugh, The Guardian.

Costumes for Romeo and Juliet

And of course no one had as much taste as Rudolf, vast 19th-century paintings of naked men on glowing velvet walls, Russian-Oriental fabrics and furs, all on a huge scale.  Lee Radziwill, “The Real Lee Radziwill, ” New York Times Magazine.

A 2006 exhibition, The Nureyev Style, showcased costumes designed for his ballets and items from his personal wardrobe which included Chinese dragon robes, a silk ikat coat, woven shawls, throws, and seventeen hats.  See my post on Byron which features the poet in Albanian dress. The painting is by Thomas Philips, not Delacroix.  An avid reader from his days in Russia, Nureyev embraced the motto “fear nothing.”