Neil De Grasse Tyson is an astrophysicist and director of New York City’s Hayden Planetarium.  Recently, The Alcalde, official magazine of the Texes Exes (University of Texas) declared him the “sexiest astrophysicist alive.” During the interview Tyson admitted to owning about 100 ties, all with cosmic-themed designs. 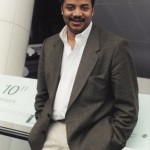 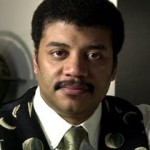 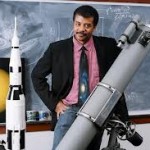 He translates complex scientific concepts into everyday language, but more than that, he makes science compelling. Really compelling. You might think you don’t care about asteroids, but Tyson will make a believer of you in three minutes or fewer. “The universe wants to kills us!” he proclaims in one lecture. “We’re on a collision course with the Andromeda galaxy. The universe is expanding on a one-way track to oblivion!” Star Power, The Alcalde.

From the photos we can see the elements of Tyson’s style–classics jazzed up with colorful shirts, an array of ties with astronomical designs, and other similar-themed touches like the vest with sun and planets.  They serve him well as a popularizer of astronomy. I love top image with his hand on a replica of a moon or meteorite. Although it’s hard to see the details, the middle photo in the second roll of photos shows him in a jacket with a pattern of different phases of the moon. Tyson should look into Piero Fornasetti’s designs. The Italian designer did a wonderful set of designs with images of the sun and moon. Tyson has appeared on The Daily Show, The Colbert Report and is the host of PBS’s Nova. The PBS site has a video of of Tyson’s office with his vast collection of cosmic paraphernalia.