There’s only one man in Paris who knows how to dress and that’s Modigliani.  Picasso

Picasso was small, dark, thick-set, worried and worrying, with gloomy, deep penetrating eyes, which were curiously still. .. His clothes were half-bohemian, half-workman, and his excessively long hair swept the collar of his tired jacket.  Modi (Modigliani), by contrast, was “young and strong and you couldn’t take your eyes off his beautiful Roman head with its absolutely perfect features.” Fernande Olivier cited in Jeffrey Meyers, Modigliani: A Life.

He was the first man in Paris to wear a shirt of cretonne . . . He had color harmonies that were all his own.  Artist Quarter.

At that period (c.1911) Modigliani was spending most of his time on sculpture; he did no painting and only made pencil drawings. He always dressed in corduroy, and he wore checked shirts and a red belt, like a workman.  His thick hair was usually tousled.  Tsuguharu Foujita

Modigliani was wearing a handsome gray velvet suit and the sculptor (Ossip Zadkine) took immediate notice of the leonine head, the distinctive features, high forehead, alabaster skin, and shining, jet-black hair.  Modigliani “looked like a young god disguised as a workman in his Sunday best.” Meryle Secrest, Modigliani: A Life.

A photo taken in his studio (left photo below) shows the romantic-looking twenty-five-year-old, with long wavy hair, casually smoking a cigarette and seated with one leg up on a bench.  Wearing an open gray shirt and knotted scarf, dark trousers and thick boots, he stares at the camera with a slightly uptilted chin and an intense, defiant yet vulnerable look.  Jeffrey Meyers, Modigliani: A Life. 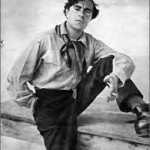 Modigliani in his Paris studio 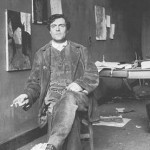 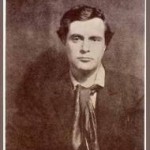 Modigliani’s style is a study in contrasts.  When he arrived in Paris around 1906 he cut a dashing figure in his elegant suits.  After meeting other artists such as Picasso he abandoned his suits in favor of more workman-like garb to fit in better with the bohemian milieu in which he now moved. The change was ironically signaled with the quip, “I used to be a bourgeois!” Modigliani fell prey to the notion that one cannot be well-dressed and considered a serious artist at the same time.The example of Modigliani also shows the importance of good photographs: artists such as Louis Nevelson and Georgia O’Keeffe were photographed by Alfred Stieglitz, Irving Penn and Richard Avedon. Few good photos of Modigliani survive. Hence it is more difficult to assess the particulars of his style through visual evidence; we must depend on contemporary testimonies.  In the accounts of Picasso’s lover, Fernando Olivier, and other artists (Foujita, Zadkine) we see how Modigliani’s good looks and elegance compared to other artists living in Paris in the early 1900s.