Graduate of Oxford and NYU Law School, Amal Alamuddin is a barrister specializing in international law, human rights, extradition and criminal law.  She’s represented Julian Assange and Yulia Tymoshenko (former president of Ukraine), and been advisor to Special Envoy Kof Annan on Syria. Tall, striking and stylish Alamuddin has been the object of many newspaper and magazine articles since her recent engagement to George Clooney.  Photos reveal some of the elements of Alamuddin’s style–a penchant for whimsical footwear (note the pink and purple pumps worn with the pink dress above), trench coat, eco-friendly fashion (tribal necklace worn in Tanzania), strong colors, and clean lines.

On vacation in Tanzania with Clooney

With George Clooney in Tanzania 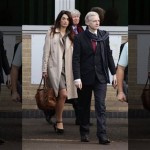 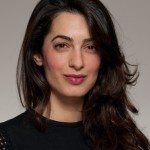 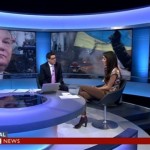