Beauty cannot be recognized by a cursory glance.

Each thread of Cocteau’s tie, vest, and suit is etched in light and shadow; the patterns and the texture pop out in vivid, tactile detail.  The drape of his coat over an extended arm adds drama and balance to the composition. Cocteau is dressed in the sartorial attire of a dandy, which, by all accounts, he was.  There is an air of flamboyance about him, until you look at his face.  His dead-serious expression registers the fierce intelligence of a keen observer, as if he is taking our measure while deigning to allow us to take his. Philip Gefter, “Irving Penn, RIP.“

Beauty is always the result of an accident. Of a violent lapse between acquired habits and those yet to be acquired. It baffles and disgusts. It may even horrify. Once the new habit has been acquired, the accident ceases to be an accident. It becomes classical and loses its shock value.

Mirrors would do well to reflect a little more before sending back images.
Art produces ugly things which frequently become more beautiful with time. Fashion, on the other hand, produces beautiful things which always become ugly with time. 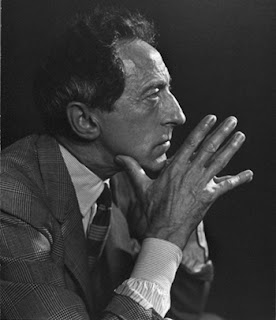 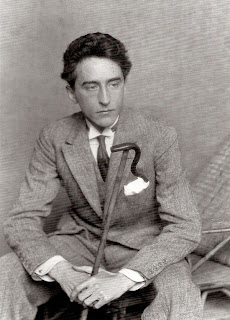 Cocteau’s statements are far more elliptical than those made by Dalí or Oscar Wilde. Cocteau espouses a much more introspective notion of dress and beauty. His quotes stress the ephemerality of fashion and beauty’s relation to notions of ugliness.Cocteau embodies the idea of “intellectual beauty” in the Penn portrait. I love the play of pattern in his attire–glen plaid suit, houndstooth sweater, and striped tie.  His face radiates a fierce intelligence. The angularity of his body adds to the beautiful line created by staged pose. His hands are carefully posed in all the photos, adding drama in some, composure in another.

One Response to Jean Cocteau