Cecil Beaton isn’t just memorable for his own superlative sense of style.  Over the course of several decades he described, as only he could in an inimitably acute and often wicked manner, his impressions of others.  Here are some examples.

On a 1970 Chanel show: I found that although everyone had said how feeble she had become, all was as it had always been. . . the clothes were as ever fresh, luxurious, under-stated, elegant, wearable, timeless. Again I was terribly impressed that the Chanel idiom seems to be indestructible. These were a confirmation, had nothing to do with what is going on in fashion elsewhere, be even so, they held their own so that one felt that anything outside would be ridiculous.

A much less favorable assessment of Elizabeth Taylor at the Rothschild’s Proust Ball: “I treated her with authority, told her not to power her nose, to come in front of the camera with it shining. She wanted compliments. She got none.” Reminding himself that he must remain professional while photographing her, Beaton adds: “Her breasts, hanging and huge, were like those of a peasant woman suckling her young in Peru. . . Round her neck was a velvet ribbon with the biggest diamond in the world pinned on it. On her fat, coarse hands more of the biggest diamonds and emeralds, her head a ridiculous mass of Diamond necklaces sewn together, a snood of blue and black pompons and black osprey aigrettes. Sausage curls, Alexandre the hairdresser, had done his worst. And this was the woman who is the greatest “draw.” in comparison everyone else looked ladylike.

And on Marlene Dietrich in her post-war years. Marlene is certainly a great star, not without talent, but a genius for believing in her self-fabricated beauty, for knowing that she is the most alluring fantastic idol, an out-of-this-world goddess, or mythological animal, a sacred unicorn. . . She magnetises her audience as she has mesmerized herself into making them believe in her as being the great phenomenon that she is. She is Cocteau’s sacred monster in person.  Cecil Beaton, The Unexpurgated Beaton. 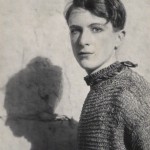 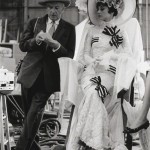 Cecil Beaton with Audrey Hepburn on set of My Fair Lady 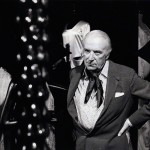 One Response to Cecil Beaton, pt.2