Anyone visiting Mexico City can see an exhibition of Frida Kahlo’s dresses until January 2014 at the Casa Azul, the Frida Kahlo Museum.  Appearances Can Be Deceiving: Frida Kahlo’s Dresses, is the first exhibition to feature Kahlo’s entire wardrobe. The exhibition features Kahlo’s beautiful regional dresses, accessories, some paintings, prostheses, corsets, and clothing inspired by her wardrobe by designers such as Riccardo Tischi and Jean Paul Gaultier. 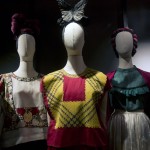 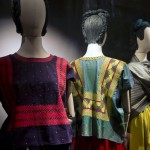 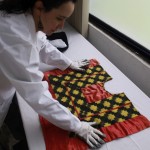 Preparing Kahlo’s dresses for exhibition at the Casa Azul

The exhibition reveals a great deal more about Kahlo’s dress than previously known. The long colorful dresses hid her wounded body and reflected a family tradition.  Frida’s mother, who was from Tehuantepec, wore these dresses.  The exhibition’s curator, Circe Henestrosa, notes that Kahlo’s “way of dressing was the result of her strong sense of identity, an identity built from physical pain.” 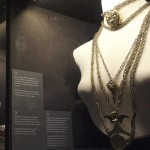 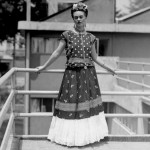 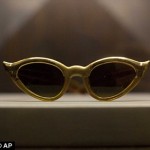 The exhibition proposes a new perspective on Kahlo’s dress. Previously, commentators thought Kahlo’s preference for regional dress reflected her love for Mexico and her political convictions. The exhibit, however, suggests that it was tradition and her disability that motivated the artist to put together an indigenous-themed wardrobe. The clothes were discovered in 2004 in the bathroom of her house! It took eight years to restore the clothes for the exhibition. Kahlo’s very distinctive look has also influenced others, notably the Mexican-American singer, Lila Downs and some current Mexican politicians such as Beatriz Paredes.

One Response to Frida Kahlo, pt.2