By Deborah Parker On September 6, 2014 · 2 Comments · In Uncategorized

Architecture is the masterly, correct and magnificent play of masses brought together in light. Our eyes are made to see forms in light; light and shade reveal these forms; cubes, cones, spheres, cylanders or pyramids are the great primary forms which light reveals to advantage; the image of these is distinct and tangible within us without ambiguity.  It is for this reason that these are beautiful forms, the most beautiful forms. Le Corbusier

Homages to the master~ 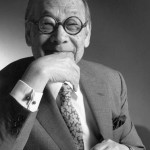 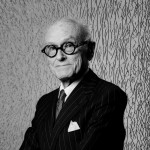 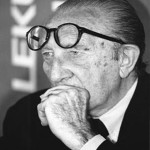 Space and light and order. Those are the things that men need just as much as they need bread or a place to place to sleep. Le Corbusier

There’s a clear line from Le Corbusier to I.M. Pei to Philip Johnson to Saenz de Oiza: the latter three clearly displaying their elected affinities by adopting the same large-framed round glasses made famous by Le Corbusier. This master’s style went far beyond his glasses: other key elements of his iconic look include the wide-lapeled double-breasted suit and a hand-tied bow tie. But the spectacles are the most conspicuous feature of his elegance. His imitators even copy him to the point of wearing the glasses on their forehead. We can’t see through Le Corbusier’s eyes: but we can see the world through his glasses.
Tagged with → architects • glasses • I.M. Pei • Le Corbusier • Philip Johnson
Share →
Tweet