There’s an interesting background to this observation.  Márquez favors the traditional colors, fabrics and textures colors of the Caribbean region of Colombia, all fabrics worn by important people in this area.  Many photos show him wearing a white long-sleeved guayabera shirt. The white suit Márquez wore to receive his Nobel Prize is known as a liqui liqui, the traditional wear for men in Colombia and Venezuela. Its style and stand-up collar likely reflects the influence of Spanish Colonial uniforms worn in the tropics.

GGM at the Nobel Banquet

There are practical reasons for such clothing–comfort, heat, lightness, flair–and social ones–they distinguished Márquez from the dark woolen clothing worn by Colombians from the highlands.  Clean and crisp, white clothes  evoke a life of cool, leisured ease. 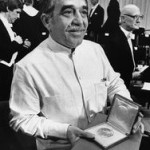 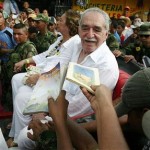 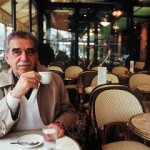 Photo below is of a Spanish Colonial uniform worn in Cuba from the Museum of the Army, Seville. Photo: Courtesy of Gustavo Pellón.