From her childhood Anne Carson wanted to be Oscar Wilde–classically educated, elegantly dressed, publicly witty. ” Sam Anderson, “The Most Exciting Thing to Do With Your Head: The Inscrutable Brilliance of Anne Carson,” New York Times Magazine. 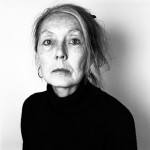 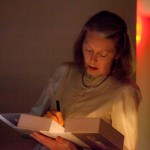 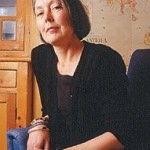 It’s been a somewhat checkered career as a gay man. I was never totally successful. I think it started in high school, when in grade ten or eleven I developed a fascination with Oscar Wilde. Some of my friends shared this fascination so we used to dress like Oscar Wilde and memorize his aphorisms and construct conversations in the lunchroom, as if we were Oscar Wilde and his friends.
But I don’t know how it developed. I can’t exactly remember why I fixated on Oscar Wilde, but I did feel that it gave me an education in aesthetic sensibility, and also a kind of irony towards oneself that was useful in later life, an ongoing carapace of irony that I think lots of gay men develop in order to get through their social and personal lives, and which I found useful for myself, too. Anne Carson, “The Art of Poetry of No.88,” The Paris Review.

Carson adopted the guise as a gay man for a while.  Her identification with Oscar Wilde is striking, not to mention the fact that she has an Oscar Wilde outfit–plaid pants, long coat with white stitching, and a red tie featuring the mythical figure Geryon.  A modern interpretation of what Wilde would wear perhaps.  I don’t see Wilde sporting a tie with Geryon on it.