Karajan is austere on the podium, businesslike from the moment he appears onstage, and restrained in his gestures. He has had his theatrical moments.

1982 New York concert:  He was dressed in a black suit over a white turtleneck (he hates neckties). His perfectly brushed white hair glowed silver in the lights. Without acknowledging the audience, he stepped on the podium, planted his black Adidas at shoulder width (they would not move for the duration of the performance), and began at once. It was a Karajan manner that has become classic.

He had a captivating look about him, handsome, with an underlying fierceness in the eyes. And he combined the dash of a wealthy sportsman–with his fast cars, his big boats, mountain climbing and skiing–with the steely self-discipline of a Buddhist monk. . . he held with tenacity his guiding principle: namely, that his musical mission put him essentially beyond reproach. Roger Vaughan, Herbert von Karajan: A Biographical Portrait. 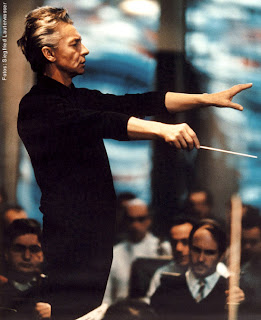 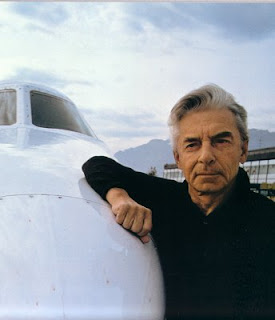 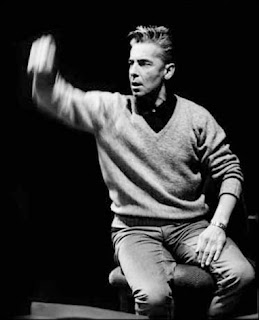 Herbert von Karajan embodied sophistication in classical music circles. The elemental ” Karajan Style” – polo-necked sweaters, a second  additional sweater casually knotted over the shoulders, turtlenecks, and black–are as spare as his podium style.  There are few photos of him because Karajan controlled carefully all images of himself. The top image is one of his favorite photos of himself.
Tagged with → Uncategorized
Share →
Tweet